So at Fattitude we have decided that rather than gripe and rave about the media we see all week to each other – we are going to share our raves and rants with you! If you think there is something we’ve missed that we so have to see – let us know by either commenting below or messaging us on Facebook!

Viri: This past week I had three magazine covers confront me. They stepped up, I stepped up and although I reigned victorious (mainly with the tool of boisterous laughter) I fear they may come for you as well. Let’s break them down: Exhibit A: Let’s tour these headlines in a conversational manner. The largest text tells us exhaustion is making us fat so we can fix that by losing 7 pounds in a week. But wait, brownie/cookie hybrids are delicious, Coca-Cola will cure anything and sugar will thicken my hair, that’s a part of the diet right? The real question is if I can look thinner with makeup, beat negativity with a stick of gum and use a spice to be happy, why the hell do I need to listen to Dr. Oz? (Who’s name is clearly tempting us to find out who’s really behind the curtain). These headlines are so contradicting, this magazine mine as well be called…oh wait, it is: Woman’s World. “God bless America” indeed.

Exhibit B: Why do we care what stars really weigh? From what I can tell, there are two versions: Falling over at a gust of wind and falling over at a gust of wind. But in all seriousness, I feel panic for Amy Shumer in this graphic considering she is clearly the largest body amongst Taylor and Kourtney. I’m sure shaming is on its way. I didn’t have time to thumb through the magazine (thankfully) but promoting value in a number associated to our body’s size couldn’t be more frightening. Our bodies are all built different

ly and if we weighed the same our bodies would wear it differently. I’m not a scientist or a doctor, but I assure you that if you reach Taylor Swift’s weight, you don’t magically grow her parent’s genes. Don’t neglect the “plus” graphic below promoting SlimFast. Marketing driven stories can get you Leo-prenup money, guaranteed.  Exhibit C: Let’s keep this simple. This magazine is called “Health”. It doesn’t matter who’s looking at this magazine, it’s telling them to “Lose 5 lbs now.”  Let me be clear that I did not seek these magazines out. They found me, everywhere I go. They’ll find you too. These are advertisements, not news. The news is that you too can combat them with self-love and the pride that no one owns you…oh and add some laughter in for good measure, that’s my happy spice.

Lindsey: All last weekend and early this week, I was stuck in bed, rendered useless by an intolerable cold. (BOO) I tended to my misery by watching really trashy television – as per the uge. During this particular cold strike, I choose to binge watch The Royals. Holy Grail of trashy TV, people. This is Gossip Girl meets Game of Thrones. (Sorry GoT, no disrespect intended – just trying to make it clear that this is about fighting to rule.)  Does anyone watch this show? The basic premise is that the spare – not the heir – is suddenly next in line to be king because his brother died – and he and all the rest of his family are trying to deal with that shift. There is mayhem, but there is also a lot of Steve McQueen and sexy situations. There are also a ton of crazy thin women – the status quo for a show like this – which is rendering all other female bodies invisible, but that’s not why I am mentioning – or rather admitting – that I took the time to watch this artistic treasure (guilty sarcasm).  I’m mentioning this because one of the story lines was that the soon to be king, Prince Liam

(William Moseley) is traveling the countryside trying to make nice with his people, and he mistakenly calls a fat woman pregnant. This moment in the show was clearly cast as a devastating snafu. BUT IT’S NOT. I am a fat lady who carries her weight in her belly and twice in my life I have been asked if I was pregnant when I was just plain old happy fat lady. If we remove the stigma of being fat, then getting called pregnant is just a mistake and honestly, a pretty logical one. Fat ladies can be shaped in ways that compare to pregnancy and sometimes plus clothes and pregnancy clothes have shapes in common. Getting called pregnant when your not is not an insult. Period. Both times this happened to me I smiled kindly at the person and said,”No – but no worries, I am not ashamed of my body shape, and I could see how you might make that assumption.” It didn’t help, the commenters still felt odd and embarrassed, but that’s there issue, not mine.

Melissa Ma:  Since watching E.T. as a kid, I have been a mega Drew Barrymore fan! I think she is a super talented actress and an all around cool, funny, down-to-earth person that I would love to hang out with. But her latest comment regarding body image was so disappointing to me. In her interview with InStyle Magazine Drew said, “I am who I am and I just don’t have a bikini body. I don’t even have a one piece body anymore! But I am loving the long rash guard, board-shorts look.” WHAT? This is a Hollywood A-list celeb who is gorgeous by any beauty standard, and she believes her body isn’t ‘worthy’ of wearing a two piece swimsuit? I am sad that she feels this way about her spectacular body, but that is her prerogative.  But mostly I’m sad for fans internalizing that statement.  I think many women reading that will conclude that if Drew Barrymore can’t wear a bikini, they as sure as hell can’t either. And if Drew feels the need to cover and hide her body in shame, they definitely do too. Ultimately, statements of this mindset, even in jest, reinforce limited cultural beauty standards and fat phobia. Hey Drew and fans, you are awesome and loved and amazing and your body doesn’t require hiding! THIS is how you get a bikini body!

Amanda: I love my public library. In that library, however, there exists a wall of diet books: Bulletproof, Jillian Michaels, Atkins, South Beach, Suzanne Somers, Skinny B’s . . . I believe it to be the largest section, followed by the cookbook section. Clearly, the public is obsessed. I discovered a few months ago that our library has a “Suggest an Item” program. This process involves you indicating through an online form that an item is missing from the library collection that you think would be a valuable addition. So, I immediately offered some body positive suggestions. (Check to see if your library has a similar program! Let’s get the word out to the masses!) For months, Hot & Heavy has been making a fuss, squeezed right between two diet books. I smile every time I pass it on the shelf. Just this week, another “suggestion” arrived – The Things No One Will Tell Fat Girls! Yay, Jes Baker! I’m reading it right now, and loving it! I’m also adoring the fact that, because it’s now in the library collection, others will be able to discover and love it (and themselves) too!!  (Side note:  I’m the first one to check this book out, so having it touch my face is safe. But be warned, it’s not a good idea to gum library books that have been in circulation for a while. Please, just trust me on this one.)

Kairo: So as you’ve probably gathered I am a TV series junkie, so this post is of course about a TV show called Rosewood. For one, Morris Chestnut is STILL sexy! *Cue Mouth Drool* Any-who, in this show he plays as Miami pathologist Dr. Beaumont Rosewood Jr. (that name, yes). Having his own practice, Rosewood almost always swindles his way onto cases. In one episode there is an fat gentlemen who we see in the beginning of the episo 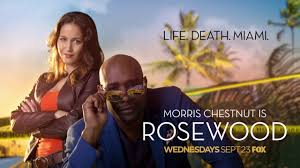 de seemingly fall to his death. As the show progresses we learn he was already dead when he fell per Rosewoods’ unwarranted diagnosis. From there an investigation ensues where we end up facing albeit a fat-shaming doctor. Of course not all doctors who unintentionally (intentionally) fat-shame suffer from a God-complex and kill you because of your weight. This TV showed exactly how heinous this character could be and in an off hand way showed how detrimental that type of doctoring is to patients and the health profession. The fact that this man hated his patient for being fat or unhealthy in his eyes completely rubbed Rosewood the wrong way as he made it his duty to make the dude give in account for his actions. Favorite quote from this episode was something along this nature: “He confused healing him with hating him.”  Yes. Yes you do doc.

SO – WHAT ARE YOU WATCHING OR DOING – AND HOW DO YOUR FAVORITES GET IT WRONG OR GET IT RIGHT WHEN IT COMES TO DIET CULTURE, FAT PEOPLE AND BODY LOVE????