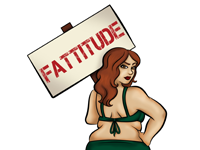 In light of the nightmare that is trolling and fat-phobic comment sections, Fattitude has decided to honor a positive comment that we notice online at least once a week. We hope that this weekly comment will serve as a reminder that body positive folks are out there – fighting the good fight! There are no guidelines about where these comments come from – they are just the ones that touched us enough that we decided to share them with you.

SO without further ado here is the post then commenter remarked on from the Honest Body Project: 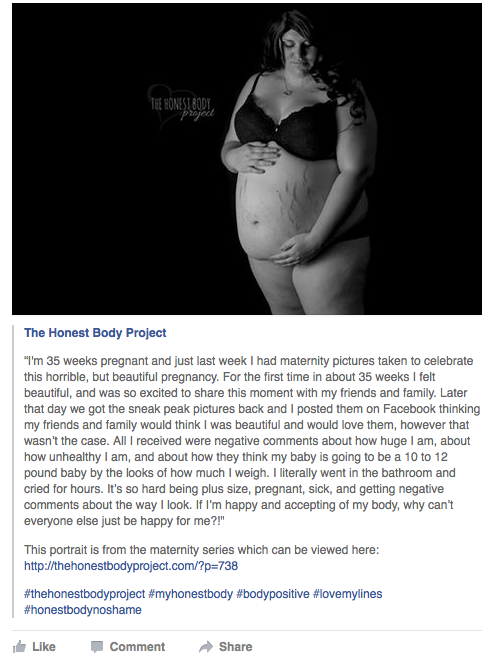 And here is the comment that made us smile:

So, What do you think?

Have you seen a comment online that made you so happy and you want to make us aware of it? Send us a message on facebook and we will absolutely check it out! 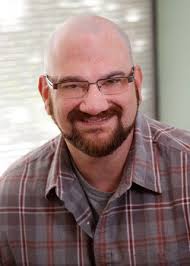 Psychotherapist Andrew Walen, is the founder of Columbia, Maryland’s Body Image Therapy Center which specializes in eating disorders, substance abuse, body image, anxiety and depression. In particular – Andrew has made it part of his mission to help men find a space to heal from eating disorders and he is fiercely working to help people understand how the male population often gets excluded when it comes to ED treatment and discussion. END_OF_DOCUMENT_TOKEN_TO_BE_REPLACED 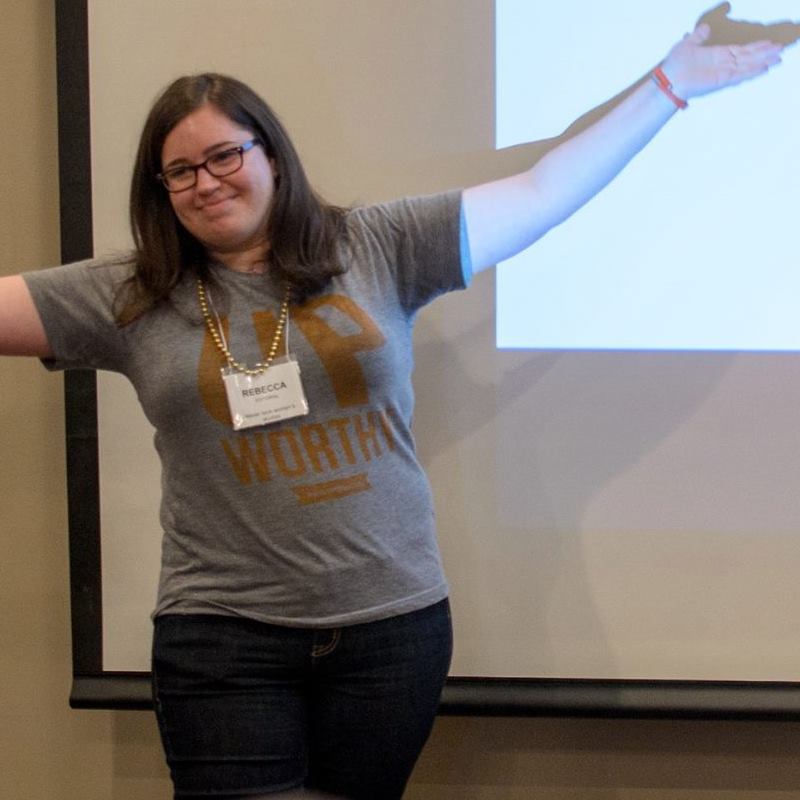 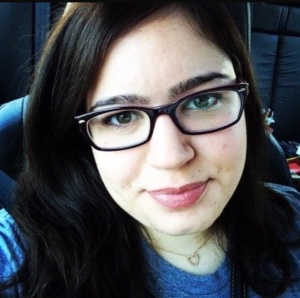 Feminist and pop culture enthusiast Rebecca Eisenberg is quite possibly one of the key factor that makes the internet so delicious for body positive folk. Currently, Rebecca is the Trends Editor at Upworthy.com, where she manages a small team of writers who respond quickly and adeptly to trending topics and news stories. A scroll through the stories Rebecca curates shows how skilled she is at deciphering each side of popular issues in a way that educates readers – smartly calling out wrong from right or fairly admitting if the truth falls somewhere in between.

The thing is – this smarty smart smart pants is super body positive and she is using the power she wields at Upworthy to try to make the world a more body accepting place. Um, YES! We here at Fattitude are absolutely Rebecca Eisenberg fans and we think you should so check her out on facebook and twitter.

END_OF_DOCUMENT_TOKEN_TO_BE_REPLACED 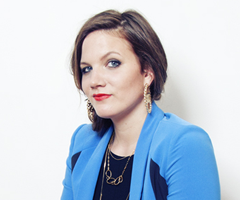 Isabel Foxen Duke helps women stop feeling crazy around food. A renowned coach, writer and thought leader in the areas of emotional eating, diet-binge cycling, and food obsession, Isabel is challenging popular beliefs about these behaviors by addressing them through body-positive and “Health At Every Size” perspectives. END_OF_DOCUMENT_TOKEN_TO_BE_REPLACED

When we, at Fattitude, listen to the talented Jazz and Soul singer, plus model and entrepreneur , Rajdulari, sing her celebratory self-love anthem, “Natural,” wew32 are so inspired!  END_OF_DOCUMENT_TOKEN_TO_BE_REPLACED

As far as we’re concerned, no one is kinder or more welcoming that Magnoliah. When Fattitude was just a twinkle in our thoughts, Magnoliah allowed us to film in her home and welcomed us with laughter and grace. Ever since, she has been delighted to support us in any way she can. Also – no one is more genuine or inspiring. In fact, she may even have already inspired you! At the close of the #fattitude trailer, it is  Magnoliah who says,  “You can be a fat person and be fucking phenomenal!” We couldn’t agree more! END_OF_DOCUMENT_TOKEN_TO_BE_REPLACED

After years of dieting, newbies to the world of Body Acceptance, find it very hard to wrap around the much discussed concept that, “Diets Don’t Work.” Thanks to Dr. Traci Mann of The Health and Eating Lab, however, we have hard evidence to prove such rhetoric. Dr. Mann, a widely cited expert in her field, has done copious amount of research on dieting, eating, fatness and self control and has proven, time and again, that, indeed, diets don’t work. END_OF_DOCUMENT_TOKEN_TO_BE_REPLACED 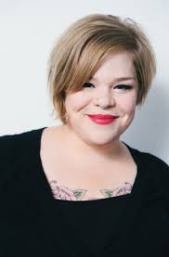 Jes Baker is known in the Body Love world as the Militant Baker and we, at #Fattitude, believe the title could not be any more suitable. She is a Baker by birth, not profession, so fans won’t find her on the Food Network baking cookies. They will, however, find the self proclaimed fiery body advocate, fat model, mental health professional, self-love enthusiast, professional rabble-rouser, crazy cat lady, TEDx speaker, soon-to-be book-author and mega-feminist, teaching others to learn to love themselves from head, shoulders, knees and toes, knees and toes. END_OF_DOCUMENT_TOKEN_TO_BE_REPLACED

So, we’ve never met her, but we are definitely fans of Amanda Trusty of amandatrustysays.com! There was a time when Amanda lived the life of a ballerina in New York. And then, one day she decided she’d had enough. She tossed her tutu, pointe shoes and eating disorder in the trash. She threw her faithful tap shoes in her suitcase and headed for the Big Island of Hawaii and life filled with Aloha Spirit, free of the conflicting voices in her head telling her, essentially, that she sucked at being human. With sunshine, warm breezes and the lull of the ocean to bolster her, her journey of self love began. END_OF_DOCUMENT_TOKEN_TO_BE_REPLACED 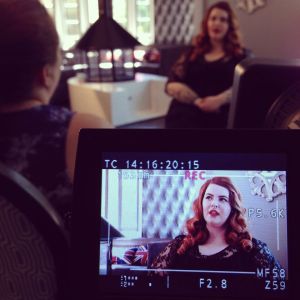 Ever since People Magazine featured Super Model Tess Munster on their front cover, she has become recognizable worldwide simply as Tess. As of late, of course, she’s taken on the last name of her fiancé, Nick Holliday, and we must admit Tess Holliday certainly has a nice “ring” to it. Tess is the badass who coined the hashtag “#EffYourBeautyStandards.” And if you haven’t yet started follwing this stunning siren, where have you been? She has close to 1,000,000 Instagram followers whom she helps, just by being herself, explore their journey of self love. Witnessing Tess take on the world with her message that beauty comes in all sizes is mesmerizingly powerful.

We have the pleasure of knowing Tess personally as she has interviewed with us, stayed with us and even watched the Superbowl with us. So believe us when we say, she is everything that you hope and expect her to be. In fact, she’s more than just a #bodypositive power house. She’s a sincerely warm and kindhearted person. For example, after her interview with #Fattitude, Tess took the time to FaceTime a friend of ours who is a huge fan of hers. She’s genuine. She’s gorgeous. She’s funny. And she’s cool.

In the last few months, Tess has gone from successful model to worldwide supermodel. Along with suddenly being thrust into the limelight, she has become a perceived spokeswoman for the #bodypositive movement. It can’t be easy to suddenly have the world critiquing her appearance or making harsh judgments about her personal lifestyle choices, but time and again, she has represented our cause with style, grace, intelligence, and more than a splash of effervescence! We have been thrilled to witness Tess’ success and we are so grateful for all she does to help #Fattitude achieve the same.